Prerequisites:
The capacitor is another one of those really useful componenets. It's used for many things, and come in different types, but unlike the resistor, they're not so simple. You need a bit of calculus to derive the equations, but if you don't like the math, skip over it, and learn the equations. They're not going to be as useful when in the future we learn about complex impedances, but that requires a bit of complex numbers. You should go back to the first tutorial to look at the symbol of a capacitor. One thing you might wanna remember is that certain types of caps are polarized (they have an anode and cathode, or simply a + and - terminal), and you DON'T wanna screw up the wiring, if you do, it'll cost you a new cap, and maybe kill many other components in your circuit.
Let's get to the fun stuff shall we?
What is a cap? Well, it's in the simplest terms, two sheets made of a conductor kept really close so  as to let keep the electron flow in the loop going, but the electrons will not pass through the capacitor itself. It's really easy to know what's going to happen. Current is going to flow. At the beginning, when the capacitor hasn't charged (as it should, because when electrons accumulate due to the current flow, the capacitor gains a new electric field), current will flow, but as time goes on, charges accumulate on the two plates, and as this happens, the capacitor will start dropping a voltage across it since you can imagine of a charging battery with the terminals connected in parallel to the powersupply.  This goes on till current stops flowing. Since there's a positive and negative terminal on  fully charged capacitor, it's going to effectively cancel out the voltage "boost" provided by the power supply, so no current flows. One thing you HAVE to keep in mind i that even though a capacitor srops voltage, it stores it as an electric field around it and not heat dissipated, as is certain from above. 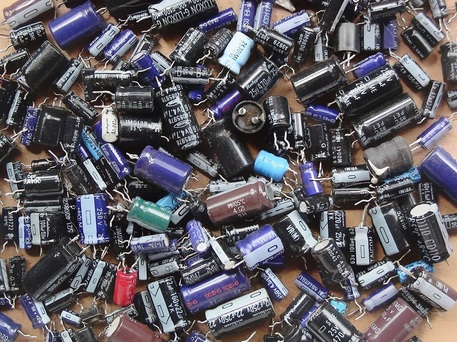 So many capacitors... Such Variety, Much Wow
Well, let's get this done with fast, Shall we? Let's go then.
You'll want to remember the following formula-
$$I = C{\frac{dV}{dT}}$$
Where $I$ is the current through the capacitor, $C$ is the capacitance (a measure of how much charge it can store, in a way), $V$ is the voltage drop across it and $T$ is the time.<br>
This formula is going to be essential to everything you're going to learn about.
It basically says that the current going through it equals something (C, the capacitance) equals the change in voltage with repect to time. <br>That might be a teeny bit hard for you to understand, but easily put, in order to keep a current flowing through the capacitor (in one certain direction in this case), you need to keep on increasing the voltage across it, and vice versa. <br>You've probably heard that capacitors don't like to pass DC voltages, and that comes from this relation too. <br>Since DC voltages don't change, the right side of the equation becomes 0. <br>So the current going through the capacitor is zero. <br>See, that wasn't hard. Math is easy (as long as you don't go into the scary parts ;-))
And it's time for the scary part (kinda, and sorry about that).
You see, when working with electronics, a lot of times, you won't be working with DC voltages, but instead triangle, saw-tooth and sine waves, and you'll be working with that last one extesively in my (upcoming as of April 1st) power supply tutorial.
But it really is quite easy. So let's just say we're working with a sine wave okay-
$$V_{in} = V_0\sin{{\omega}t}$$
(Don't worry if you don't understand this, this will be covered in much more detail later on. Just learn how to use the formula)
You replace that with the V in the formula, so it becomes -
$$I = C\left(\frac{d\left(V_0\sin{{\omega}t}\right)}{dt}\right)$$
$$I = C\left(V_0{\omega}\cos{{\omega}t}\right)$$
And that's it. Have a day off for your mind to cool off, you've worked hard. Pat yourself on the back ;-P